Stuart McMahon combines his vocals and bass playing in Sidewinder but actually began his musical career playing piano accordion in a Ceilidh band before deciding that his  vocals should lead him into rock and on to blues. Bass playing became a natural extension to his vocal duties and strengthened his contribution in Scottish rock bands before moving South where he has found himself playing with  Bernie Marsden (ex Whitesnake), Syd Twynham (Mud, Paddy Goes To Holyhead) as well as working extensively with Grant Evelyn (ex Hot Chocolate). Stuart met Clive during his period with Bronz which led to Clive joining Sidewinder in 2015. 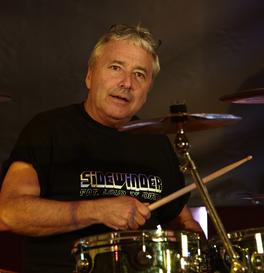 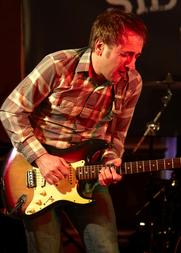 Edwards has played on many albums, most famously the acclaimed UFO albums High Stakes & Dangerous Men, Headstone, Lights Out in Tokyo Live and the legendary Uli Roth Earthquake. Clive was also involved with the re-formed British heavy rock band Stampede who toured in the summer of 2009 and also the AWE Band. 2018 also saw him tour in Japan with Lionheart.

Edwards started playing at an early age, and formed a band with Ian Raines while they were at school together called Stallion. They made an appearance on a BBC Television show for Schools and later went on to become Rococo . A lot of this early information can be found on the Rococo web site. After the Rococo recordings, Clive has recorded and performed with House of  X, UFO, X-UFO, Bronz, Wild Horses, Pat Travers, Phil Lynott, Dave Stewart, Annie Lennox, John Cale, Micky Moody, Bernie Marsden, Grand Prix and more recently with Toya and Pete Way (ex UFO). 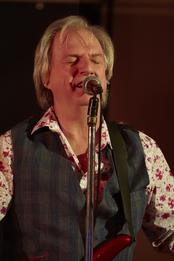 Dave Gray conceived the idea of SIDEWINDER. After many years travelling the UK with tribute bands, he felt he needed to stop pretending to be other guitarists and form a band which would allow him to play his own music in the rocking blues style that he's loved since his early days.  After many years of playing the Ritchie Blackmore parts in 24 Carat Purple, he's found with Sidewinder that he's actually played to members of Deep Purple in his audience as well as playing with Bernie Marsden (ex Whitesnake) on a number of occasions.